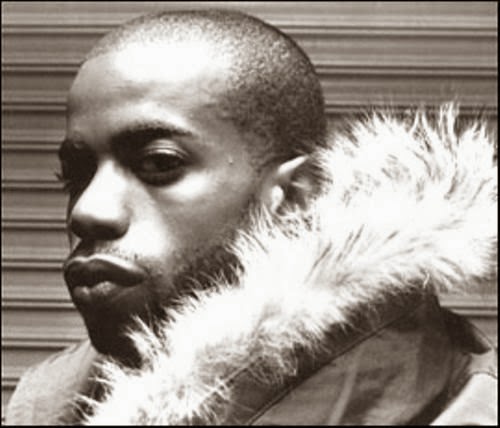 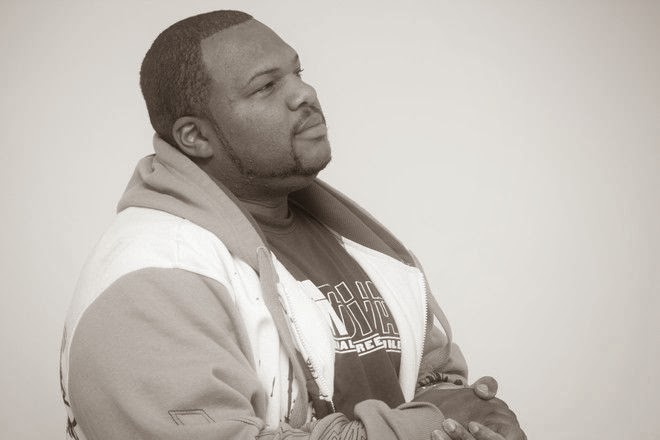 This is another session I found with Hafeese and FT. This time they brought up Kai:Bee, who some of you might remember from the joint "The Way It Iz" that he did with Guru and Lil' Dap (on the "Rhyme and Reason" Soundtrack). Anyway, I think this was done sometime after FT and Hafeese appeared on the internet show we were doing. These dudes always brought it on the mic and were just cool peoples; who we always enjoyed being on the shows and mix-tapes.  I am trying to find and post stuff every couple days going forward. It is tedious though, because I have no idea what, or if anything is on each individual cassette.  I haven't really tried to promote this (or even really how to yet), so word of mouth is where it is at right now. So thank you to Ryan Proctor (Old To The New), Kool Scooby G (Mega Fresh Posts), Oxygen (Soundsci and WUSB alum), my dude The Asmatik, and anyone else that I am forgetting that spread the word!

J-LIVE AND SKAM2? @ "THE BASEMENT" on WUSB STONY BROOK 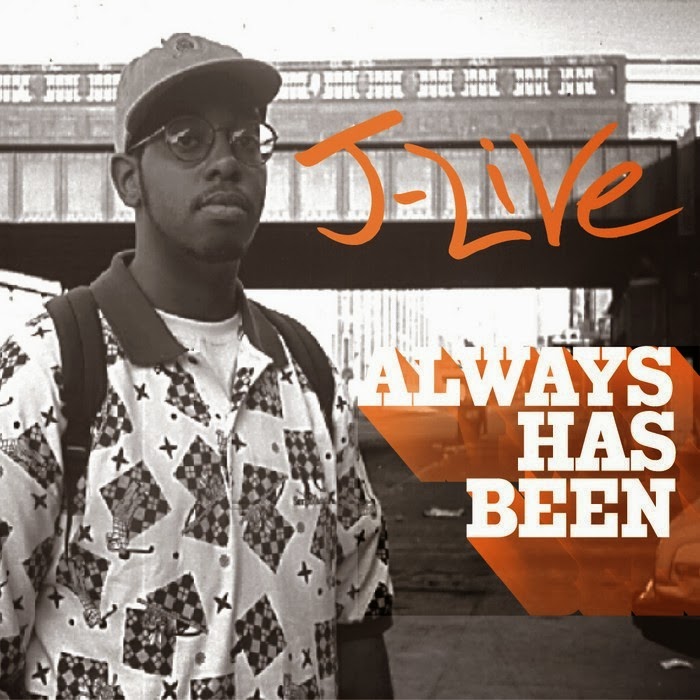 Happy New Year Hip-Hop dudes, I am finally trying to continue my mission to transfer highlights from the various radio shows and mix-tapes we did back in the day....Hopefully, I can be a lot more consistent from now on (and that would be cool).  Anyway, this was one I was really searching for; the first time J-Live came through and actually, the second time Skam2? came up.  This I believe, was around the time of J-Live's "Can I Get It?" single, and these two went back and forth; freestyling over current beats and classic instrumentals, cut up by DJ Cross Phada.  Skam2? had come up about a month or two earlier with The Jigmastas, so we had only recently met him.  If I remember correctly, my partner HB had picked up J-Live and Georges Sulmers from Raw Shack Records in Brooklyn to drive them to Stony Brook, and randomly bumped into Skam2? while he was skateboarding on Atlantic Avenue. He jumped in the car too and rolled to Long Island with them.  That was the type of impromptu stuff that made the show....More uploads to come!

I'm back after another hiatus.  I am going to try to be a bit more consistent going forward....This tape was from an interesting broadcast in January of 1996.  We had just got our new shift on Sunday nights after spending most of 1995 doing a 3:00 a.m. to 6:30 a.m. slot on Friday mornings.  That was the epitome of a graveyard shift!  Moving up to midnight on Sunday night / Monday morning meant we could finally start getting more guests, because the old slot made it almost impossible to book acts from NYC....It also meant we could try to get another deejay because our first one, Rick Smooth had to leave the show because of the awful overnight hours.  My friend Maurice had been telling me about DJ Cross Phada, who he had went to high school with, and it finally worked out that we were on the air early enough for him to finally come through...That being said, on this particular night, we tried the epic task of trying out everything for the first time. First we invited Cross Phada. Second, we scheduled 2Face from Natural Elements, Shadowz In The Dark and Crimedanch Cartel to all come through.  What happened next was utter mayhem with ridiculous technical problems trying to set to the turntables, mic up the back room and deal with all of the guests (who all showed up at the same time)!  This was an old station (at that time) and really wasn't set up for the type of show we were trying to do. Still, with the help of Charlemagne and Rick Smooth (who dropped by to hang out) we managed to hook up and patch in the turntables; getting the groups on the air starting around 1:30 a.m. Anyway, everything that can go wrong with a broadcast happened that night, including the show not being able to be recorded in the studio.  The tape I have of this freestyle I actually got from a listener, who I met after the show at a 7 Eleven, lol....Pardon the quality, but this was actually a good set, all things considered. This was the first night we met Cross Phada too....Time flies!

DRAMA KLUB @ "THE BASEMENT" on WUSB 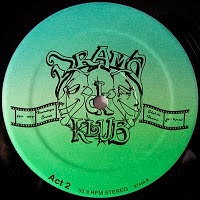 DRAMA KLUB @ "THE BASEMENT" on WUSB

The is the second update for the day.  This one was an appearance from our extended family; The Drama Klub, who our deejay, Cross Phada was also the producer for.  The Drama Klub released the now-highly collectible 12" "Goin' Down" back in 1996 and I doubt any station played that record more then us!  Promoting that record was the introduction of my co-host HB and myself to the other side of the music industry.  It was a reason to meet and network with a lot of new people, even though this was just an indie release. Fast forwarding back up to 1998, Poppa Shot (the lead emcee in the group) had been on the show several times previously, but this might have been his final appearance before The Drama Klub disbanded..It was always live when these guys showed up because they were far from strangers!

ADAGIO! @ "THE BASEMENT" on WUSB 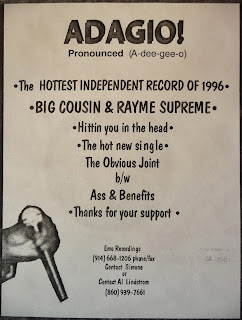 ADAGIO @ THE BASEMENT on WUSB

I have slacked off with the updates the last couple of days, but I'm back.  In order to catch up a little bit, I am posting two new ones today.  Both are from around 1998....The first one is the second appearance on the show by Adagio!  Adagio! comprised of two members; Big Cousin from Mt. Vernon (who produced all the beats) and Rayme Supreme, who was from Philly.  These two put out several dope EPs and 12"s throughout the mid-to-late 90s and were two of the most humble and chill dudes in the scene as well.  Big Cousin always used to lace us with the early tracks and test presses, which was ALWAYS a good look!  The first time they came up (sometime in 1996) they brought up their artist Wisdom and also Breezly Bruin from the Juggaknotz. I need to find that tape too!  This particular show, Big Cousin rolled all the way out to Long Island for dolo, which said a lot about how driven he was about his craft. It was always great to know artists who worked as hard to support us as we did to support them! 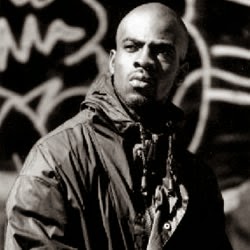 This is another older one from "The Basement".  I think I got in touch with Maestro because he was promoting his new release "Death Ministry" and put his contact number in the CMJ Magazine.  This was pre-internet social media, so if we didn't meet an artist in person at a show or at a record label, we would have to be creative. Sometimes we would get management or label phone numbers off of the 12"s and also industry magazines like CMJ, Gavin or Urban Network.  I met a lot of cool people in this fashion....Maestro Fresh Wes, of course was the first rapper to really achieve larger fame in Canada in the late 80s, but he had since moved to Brooklyn and was taking the indie route...Wes really is one of the most humble dudes I have ever met and he actually later on introduced me and my radio/business partner HB, to Gauge (who became our first artist on Phono Synthetic Records). We set up this interview and Maestro took the Long Island Railroad all the way out to Stony Brook to appear on our show. He also brought up my man S.L.D., who was promoting his upcoming 12" on V-Max Records at the time. S.L.D. was an artist from the Bronx, who was also mad cool and he came up to the show several times after this. This was a great show with two artists who became instant fam to all of us at the station..... 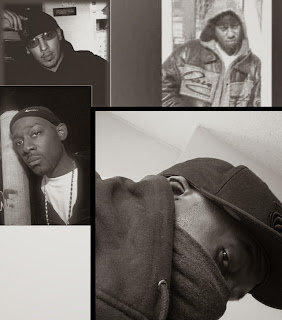 This is another freestyle marathon that we had up at "The Basement".  This was around the time that I.G. Off and Hazadus were promoting a live show that they were putting together at the Nuyorican Poet's Cafe in Manhattan with Mister Live, Tony Bones, A.L. Skills, Kwest, and a bunch of others...A group of these emcees previously went up to the "Underground Railroad" radio show on WBAI to promote the event, so I.G. Off and myself tried to put together a similarly epic freestyle-themed radio show out in Long Island. Except for these four emcees, nobody else made it out but we still had about an hour straight session, over multiple instrumentals....This is only two parts of it and I will put up another part when I find the other tape of this show.  Again, I am currently going through HUNDREDS of tapes from the 8 year run of the show and I am trying to find a lot of the different guest appearances that I remember. Finding these special appearances from the late and great I.G. Off, make this archeological mission worth it alone...

We HIGHLY ENDORSE these blogs!